The Message is clear – World Peace and Uniform Economic Growth 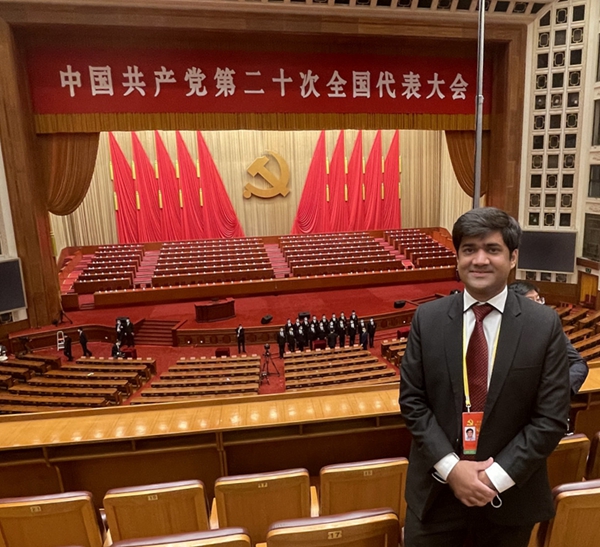 As my steps headed towards the People’s Great Hall in Beijing, I witnessed a historic moment of the 20th National Congress of the Communist Party of China convened in Beijing.

The October wind in Beijing was flying the red colored national flags on all government buildings around the Peoples Great Hall. I with journalists from China and all parts of the world rushed to line in to get inside press gallery and get a seat on a suitable place from where we can have a clear live vision to see the Chinese President.

All media persons seemed oscillating between excitement and curiosity. They walked fast, stopping on different spots to get pictures in front of imposing national buildings around the hall.

All journalists including locals, foreigners and those like me who were on their maiden visit to China, were thinking same in their hearts and minds that what is going to happen today as China is becoming the epicenter of the global stage.

After passing from the elegantly made security protocols, journalists reached the press gallery and took their seats to observe and report today’s meeting proceedings.

Enthusiasm of attending the historic conference was at its peak. Certainly everyone around wanted to have a picture with the socialist symbol hammer and sickle in the background.

On the right side of press seating, a sophisticated military band was assembled to play national anthem and tunes.

Though I had been in journalism for the past decade, for the first time I was feeling proud of my profession ever than before.

“History is being made and I am part of it,” I said to myself.

Soon the bells in the hall started ringing conveying the message that delegates and top government leadership was about to enter the hall.

First the delegates arrived and around 350 seats were filled. Then President Xi Jinping led the top leadership entering and there was a roar of applause around.

The military band played national anthem and the premier invited President Xi Jinping to present the report. Now there was pin-drop silence in the hall and every one was focused on the president’s dice.

“What message would the president send to the world?” I asked myself.

The president started his speech in Chinese and I became anxious because I cannot understand the language, but soon I become calm when I started receiving the immediate English translation from our host official in a WeChat group. A Chinese journalist sitting beside me also offered a helping hand and interpreted every important point for me. It was another relief.

President Xi delivered to the Congress a report titled “Hold High the Great Banner of Socialism with Chinese Characteristics and Strive in Unity to Build a Modern Socialist Country in All Respects” and started deliberating the comprehensive report point by point.

According to Xi, today, our world, our times, and history are changing in ways like never before. China remains firm in pursuing an independent foreign policy of peace, he said, adding that the country adheres to the Five Principles of Peaceful Coexistence in pursuing friendship and cooperation with other countries, and remains committed to its fundamental national policy of opening to the outside world.

He was talking about peace when it has become a distant dream in the past two decades. Since the U.S. waged war on Afghanistan after the 9.11 attacks, underdeveloped countries were left in a perishing situation. Western developed countries tried to sell their narrative of establishing peace with invading wars on countries in Asia and Africa, and the results were deaths, displacements and hunger. The continuous expansion of NATO aggravated the evolution of the Russia-Ukraine situation and plunged the world into further turmoil.Their theory destroyed the social fabrics of the society and brought suffering to humanity.

While President Xi emerged on the political canvas of the world and brought the idea of Belt and Road Initiative, a complete different model of economic growth to strengthen the global economy.

BRI has connected continents through economy and improved the livelihood of the people. The concept brought a ray of hope to weaker economies and they are thinking of a world of peace, with better living standards and no hunger.

The governments and people of Asia, Africa, Eurasia, South America and the pacific islands have responded to the idea of President Xi Jinping and are convinced that economic growth is possible without wars. They feel secure that their resources are protected and beneficial for them in the Belt and Road Initiative. They see light at the end of tunnel.

As it’s said in the report, China adheres to the right course of economic globalization. It strives to promote trade and investment liberalization and facilitation, advance bilateral, regional, and multilateral cooperation, and boost international macroeconomic policy coordination.

The country is committed to working with other countries to foster an international environment conducive to development and create new drivers for global growth.

“What do you think is the message behind the president’s speech,” asked a Chinese journalist sitting with me while leaving the press gallery.

“The message is loud and clear – it’s world peace and economic growth for everyone,” I replied and stepped out from the great hall.

*This article is from China Economic Net.