Secretary Tian Yuhong of the Secretariat of the All-China Journalists Association attended and addressed the opening ceremony of “Training Course for Laotian Journalists”.

In his speech, Tian Yuhong briefed the journalists on the recently concluded Sixth Plenary Session of the 19th Central Committee of the Communist Party of China (CPC). He stated that the plenary session has taken maintaining a global vision as an important historical experience of the CPC over the past century. He pointed out that the CPC has been cogitating on the future of humanity with a global vision, keeping to the path of peaceful development, working with the people of other countries to build a community with a share future for mankind and keeping the wheels of history rolling toward a brighter future.

Tian further suggested that this year marks the 60th anniversary of the establishment of diplomatic relations between China and Laos and the China-Laos Friendship Year. The China-Laos railway, which will begin full operation, is a landmark railway of friendship, cooperation and prosperity. He mentioned that upon the backdrop of advancing of the Belt and Road Initiative and thanks to frequent exchanges of visits facilitated by Chinese and Lao journalists’ associations, journalists of the two countries are carrying out closer and more fruitful exchanges. This online training course is a good practice to maintain exchanges despite of the COVID-19. He hoped that media of the two countries could further contribute to the friendship between China and Laos, deepen cooperation, make the voices of developing countries heard in the world and play an important role in enhancing bilateral pragmatic cooperation and maintaining peace and prosperity in the Asia-Pacific region. 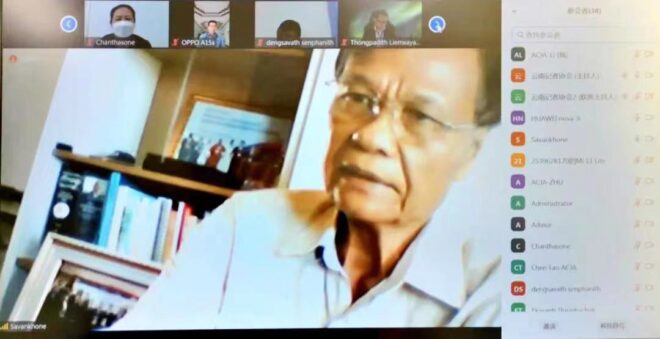 Chairman Savankhone Razmountry of Lao Journalists Association stated in his speech that 2021 marks both the centenary of the CPC and the 60th anniversary of the establishment of diplomatic ties between Laos and China, a glorious and significant year for both countries. Under the leadership of the CPC, the Chinese people have made extraordinary achievements across all fronts on the path of socialism with Chinese characteristics. China is striving towards prosperity and rejuvenation of the Chinese nation. Lao Journalists Association spoke highly of the social responsibilities and outstanding contributions that ACJA and Yunnan Journalists Association have undertaken to present China’s national development policies and promote international and regional friendly exchanges and cooperation.

Journalists are attending the “Training Course for Laotian Journalists”.

The training course ended on December 4th. In addition to online study, participants also paid field visit to a section of China-Laos railway in Laos. Over 20 journalists invited by the Lao Journalists Association participated in the training course.